Experience more than four centuries of horticultural art in Blankenburg features the Baroque terrace garden with its bubbling water axis above the town's Little Palace. This is followed by the Mountain Garden with Teahouse, the Obermühle, and the Large Palace. The modern pheasant garden, the palace landscape park, and the animal park round off this unique ensemble.

Since the 17th century, Blankenburg had at times served as a secondary residence for the Dukes of Braunschweig-Lüneburg. In 1707, Blankenburg was elevated to the status of an imperial principality and it became a small independent princely residence.

Blankenburg Castle, first mentioned in writing in 1123, was rebuilt several times and was then expanded in the early 18th century according to the plans by Hermann Korb. From 1718, the terrace garden was laid out together with a garden house, now called the Little Palace. The basic Baroque structures with fountain, sandstone statues, vases, and clipped hedges remain to this day.

The mountain garden, separated from the terraced garden by the city walls, was designed in the early 18th Century with a grand staircase, two fountains, and a viewing platform. At the end of the 19th century, the garden was expanded to include the "rose corner" and areas along the city wall. The mountain garden with tea house and the city wall with the Princesses Tower were restored and have been open to the public since 2001.

The pheasant garden, dating back to at least 1700, has been redesigned multiple times since the mid-19th century. In 2002-2003, the historic structures were once again made visible, with the legend of the pheasants depicted in a piece by the ODIOUS artists group.

Other attractions in Blankenburg (Harz)

The historic centre of Blankenburg is rich in late medieval half-timbered buildings surrounded the Great Palace on Palace Hill. The palace sits atop a 305 metre high limestone hill known as the Blankenstein. The Little Palace is located on the eastern edge of the old town and now houses the town's tourist information office. Also worth seeing is Church of St Bartholomew, dating back to around 1200, the local museum, and the Town Hall on the main market square.

On the northern edge of the Harz near the towns of Heimburg and Blankenburg is the former Cistercian Michaelstein Abbey. The monastery has been known for centuries for its fish farming. Remains of Regenstein Castle, first mentioned in writing in 1169, stand on a prominent rocky outcrop approximately three kilometres north of the city. A special feature is the architecture carved into the sandstone mountain, with 32 caves and trenches, which mostly can still be visited. 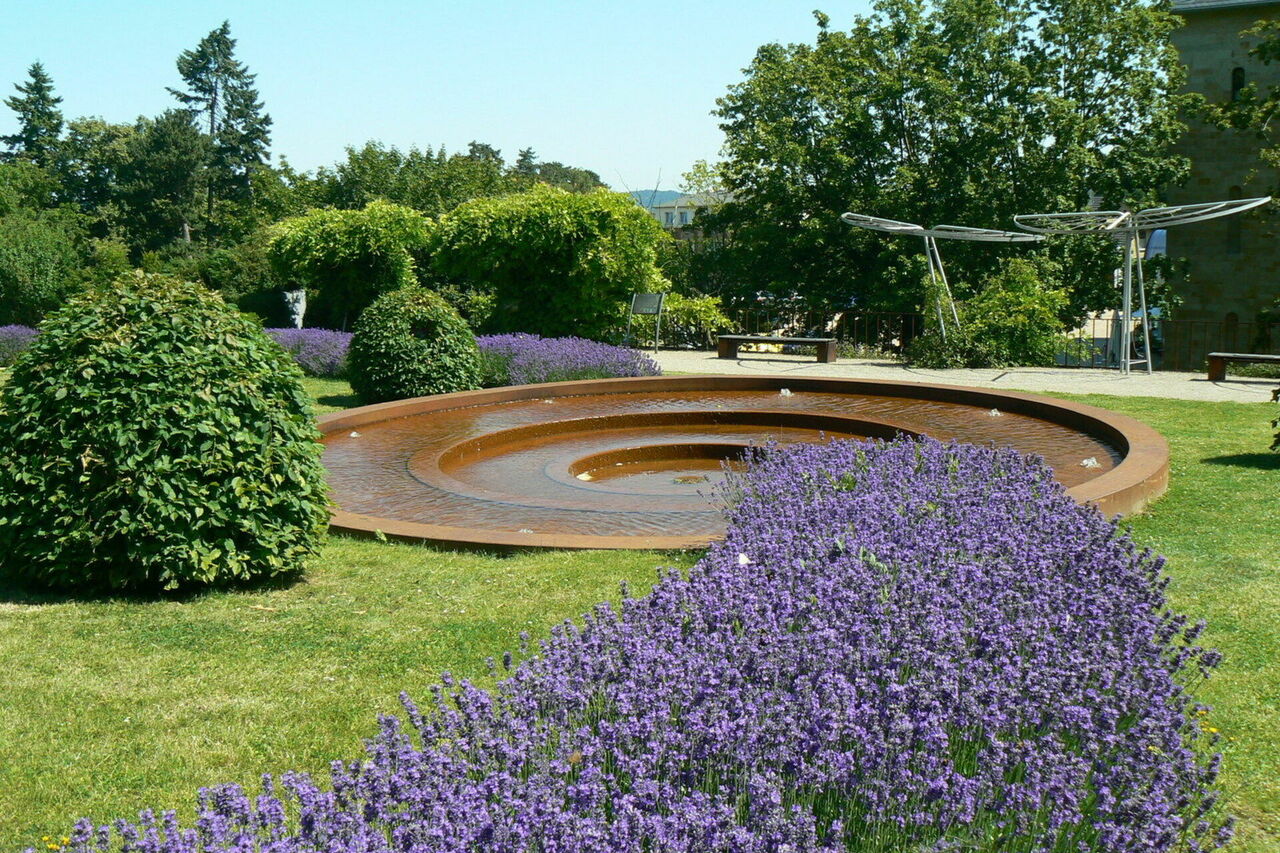 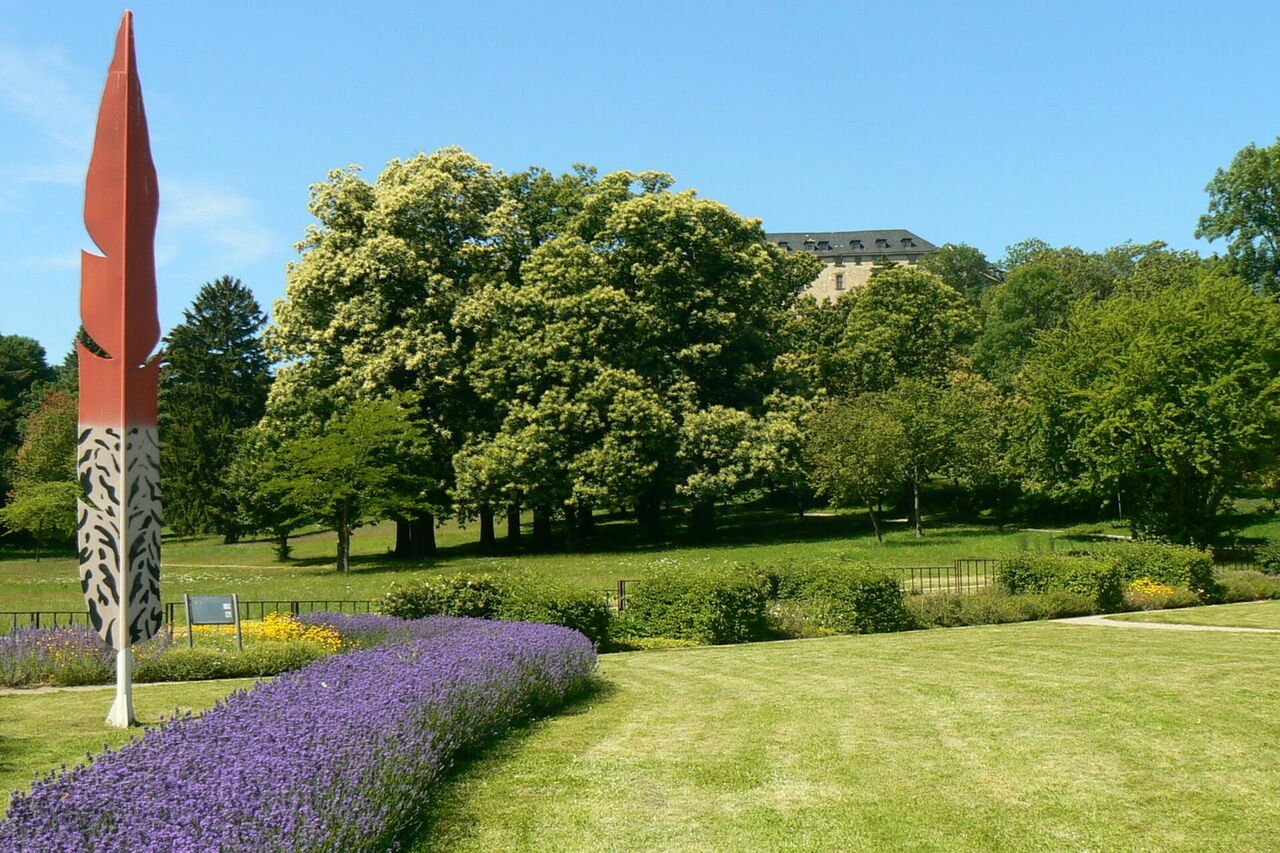 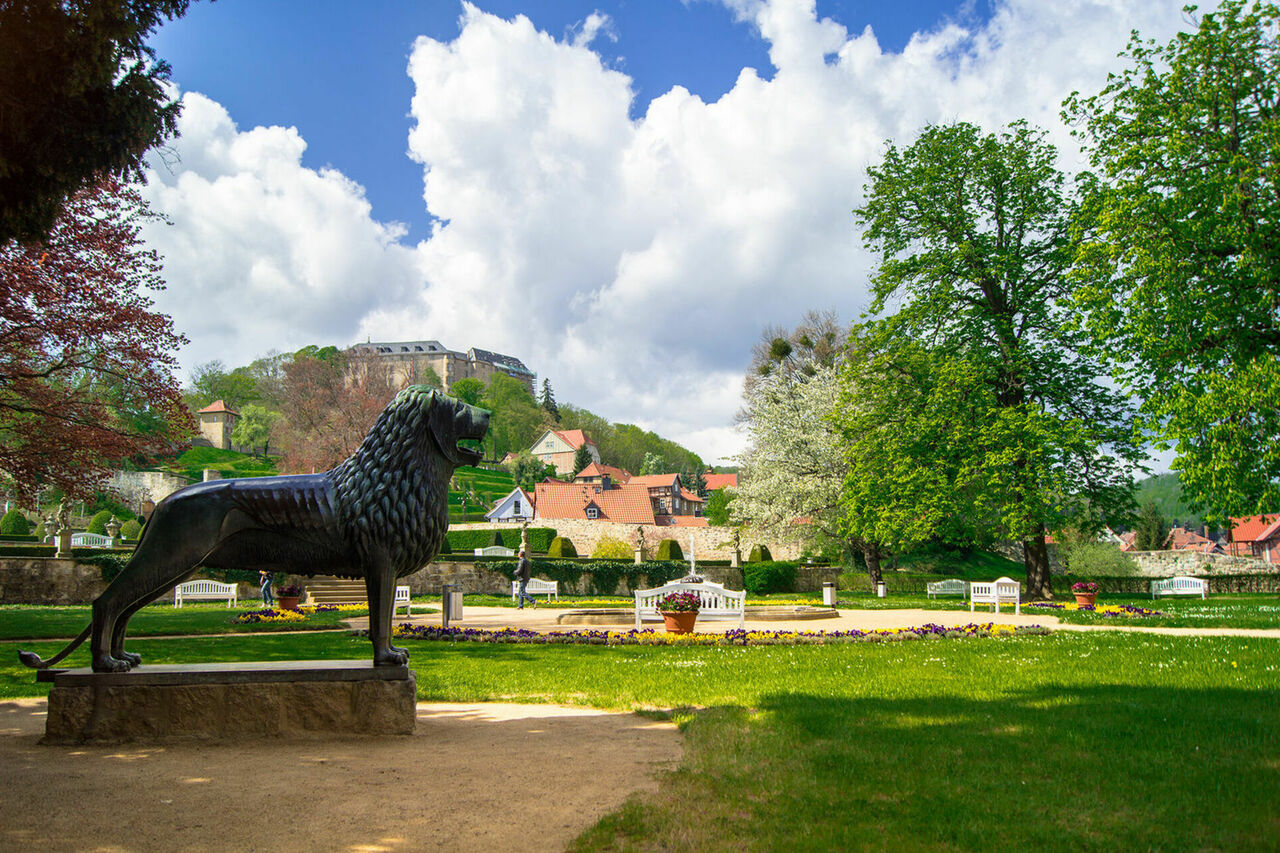 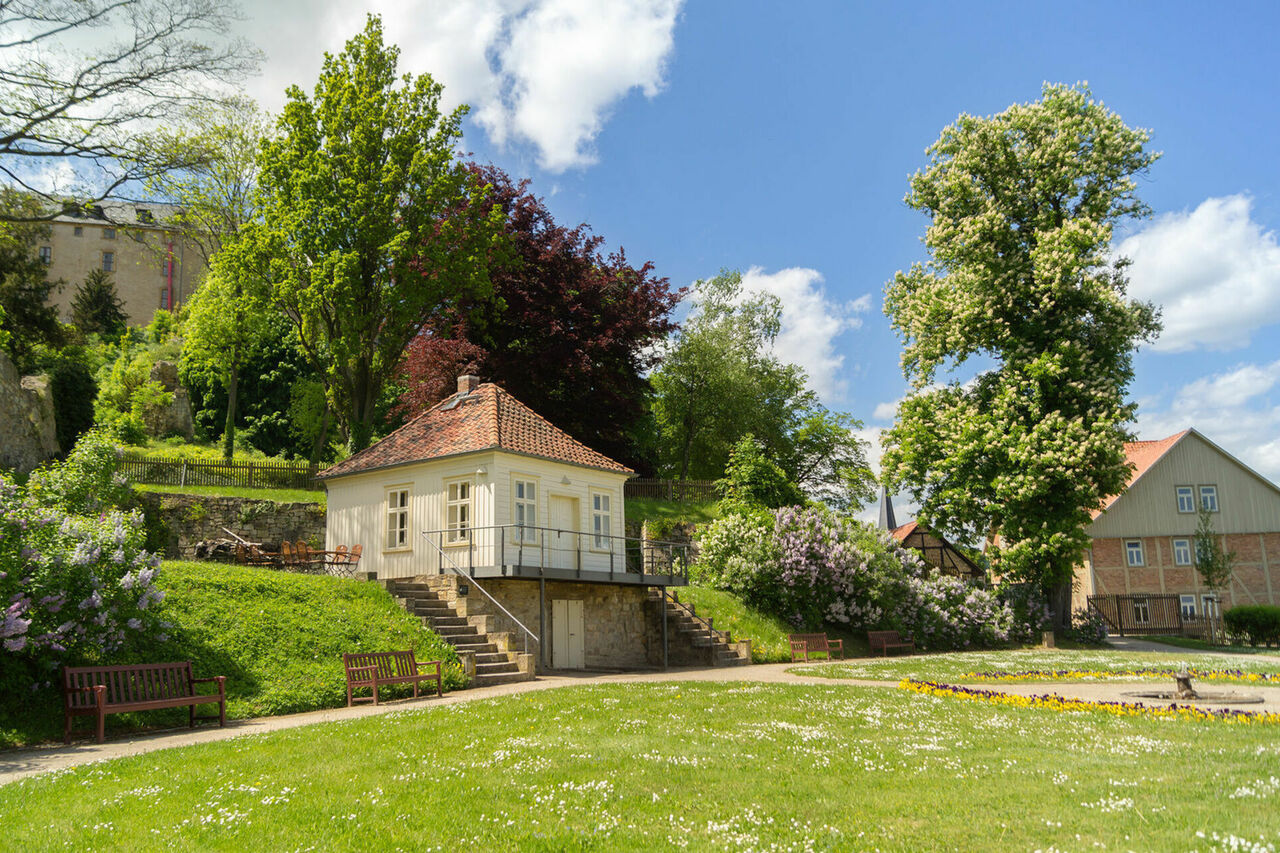 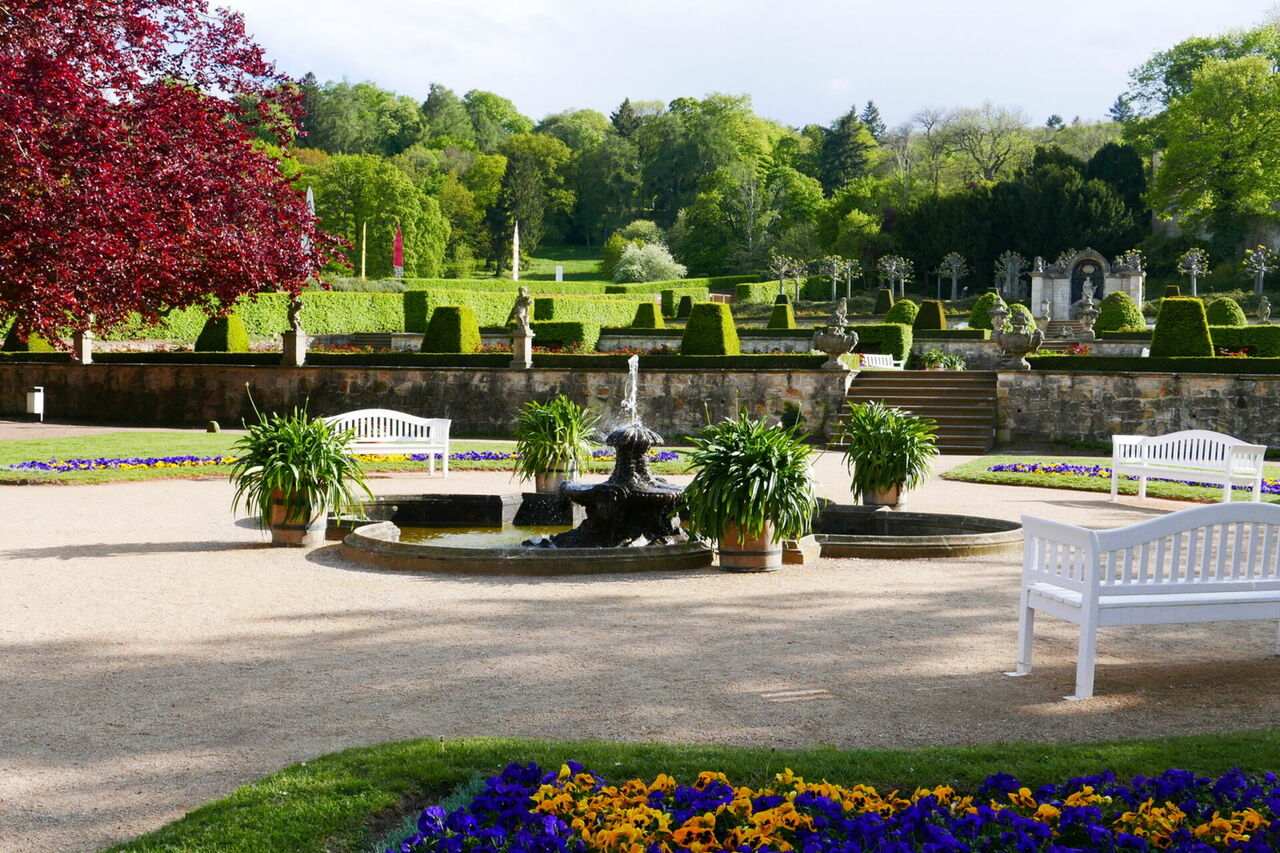 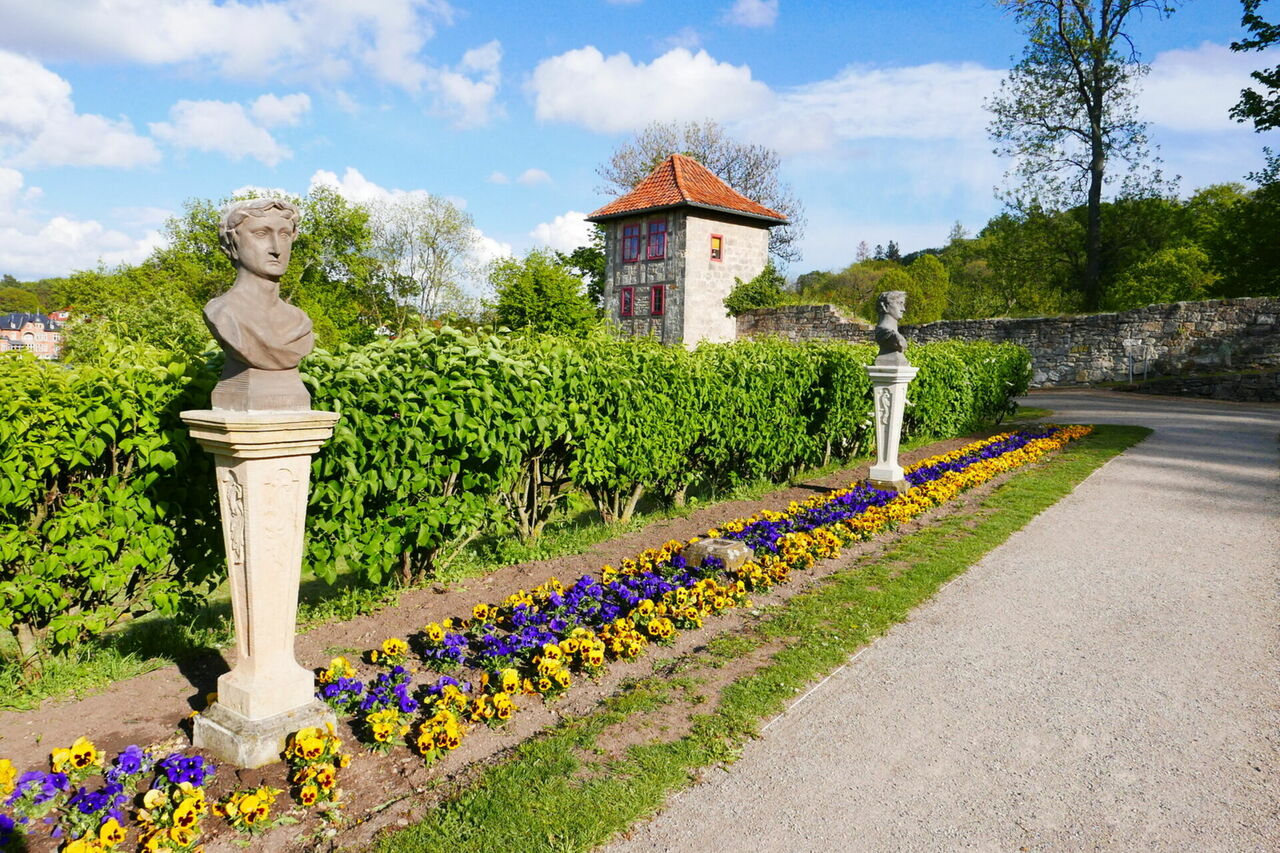 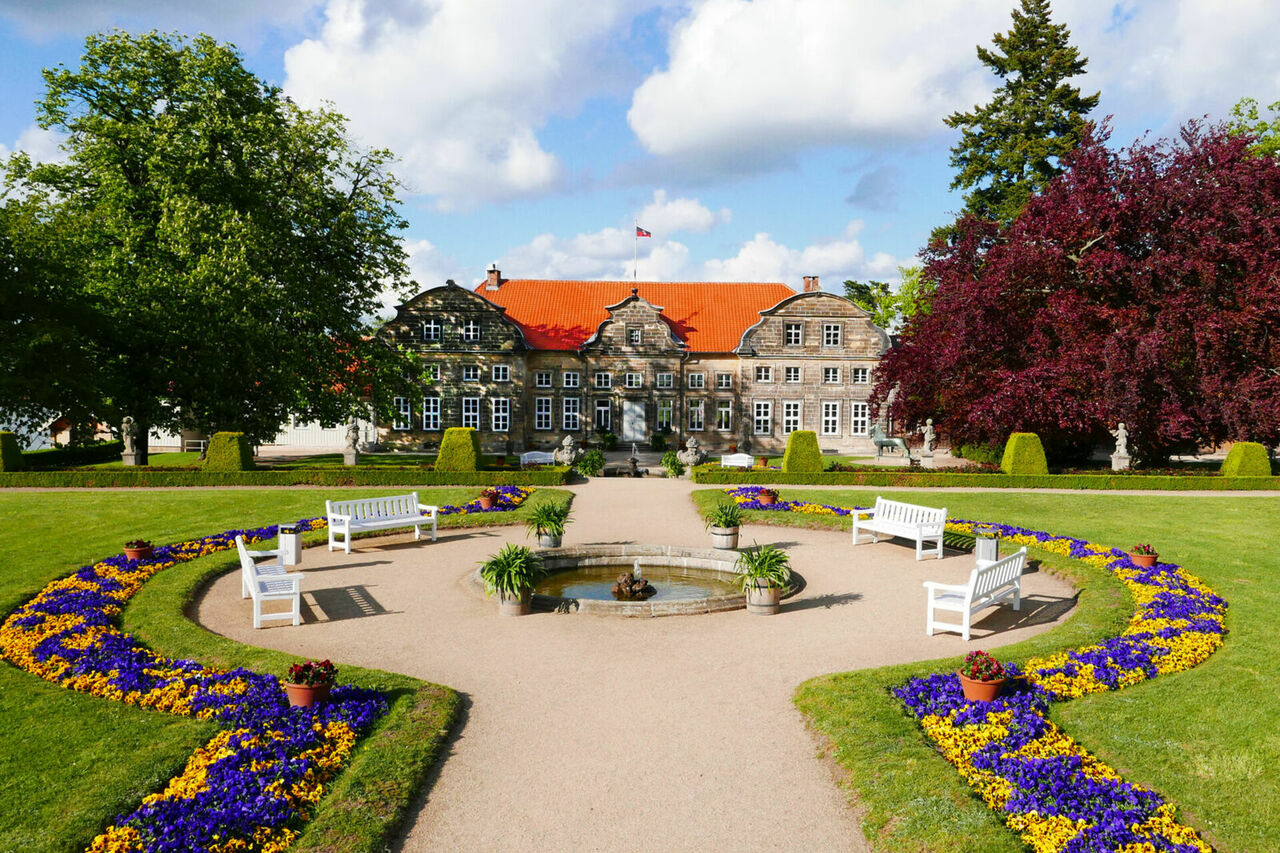 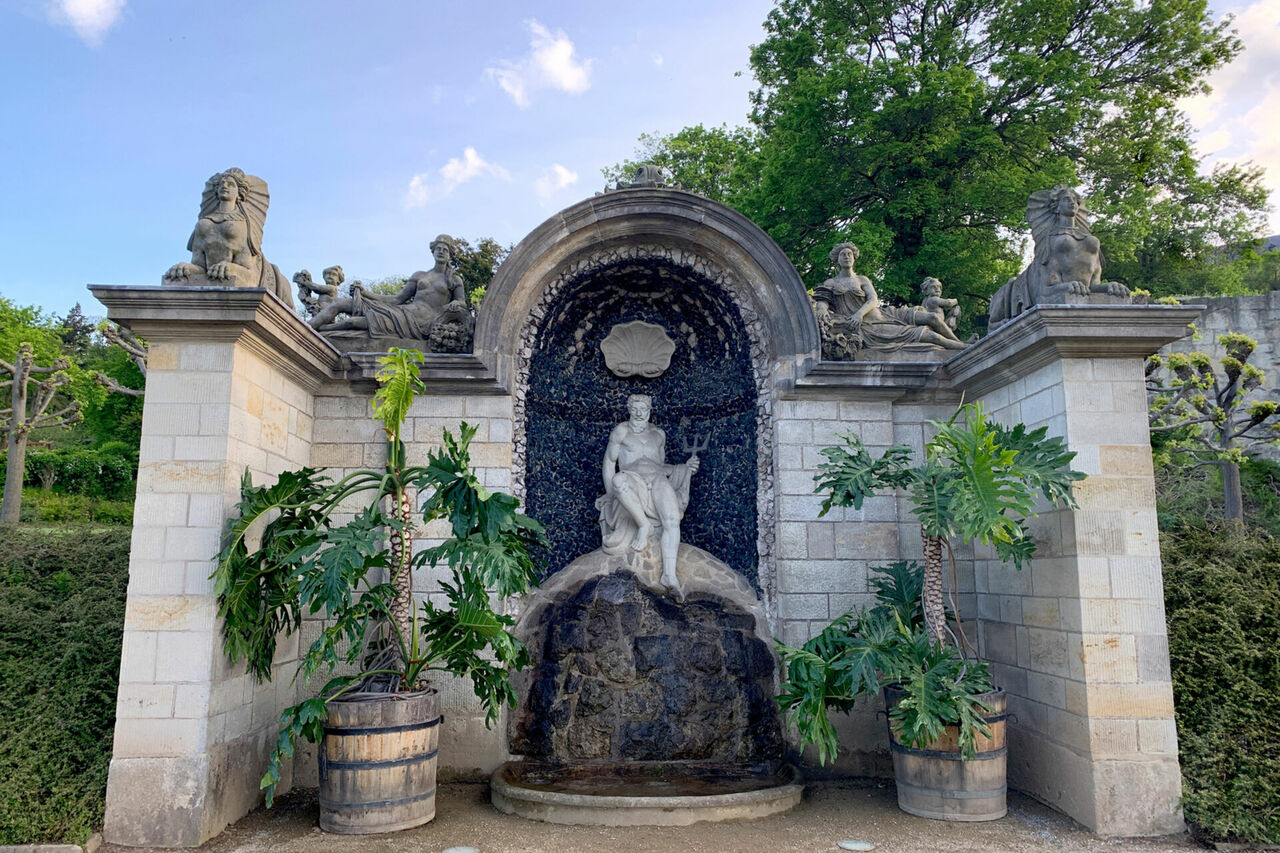 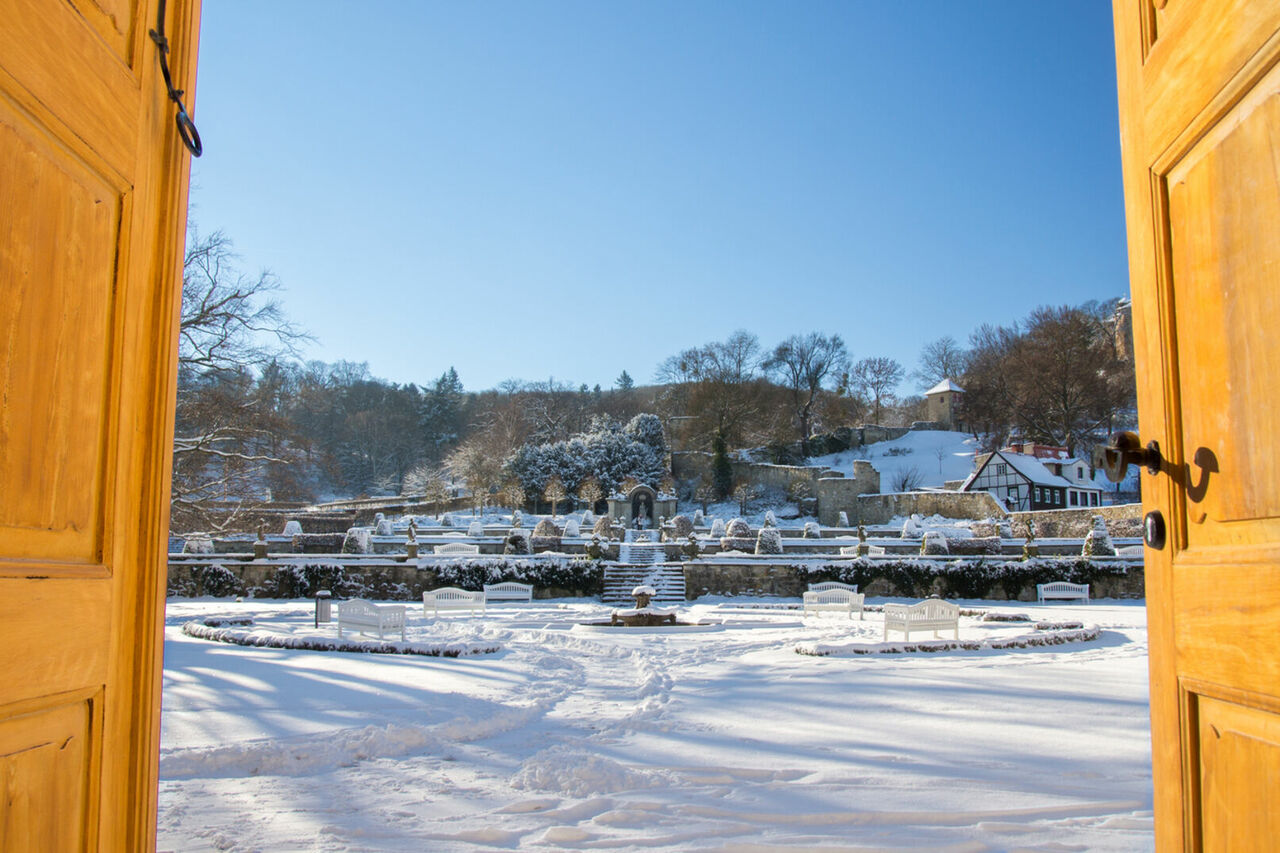 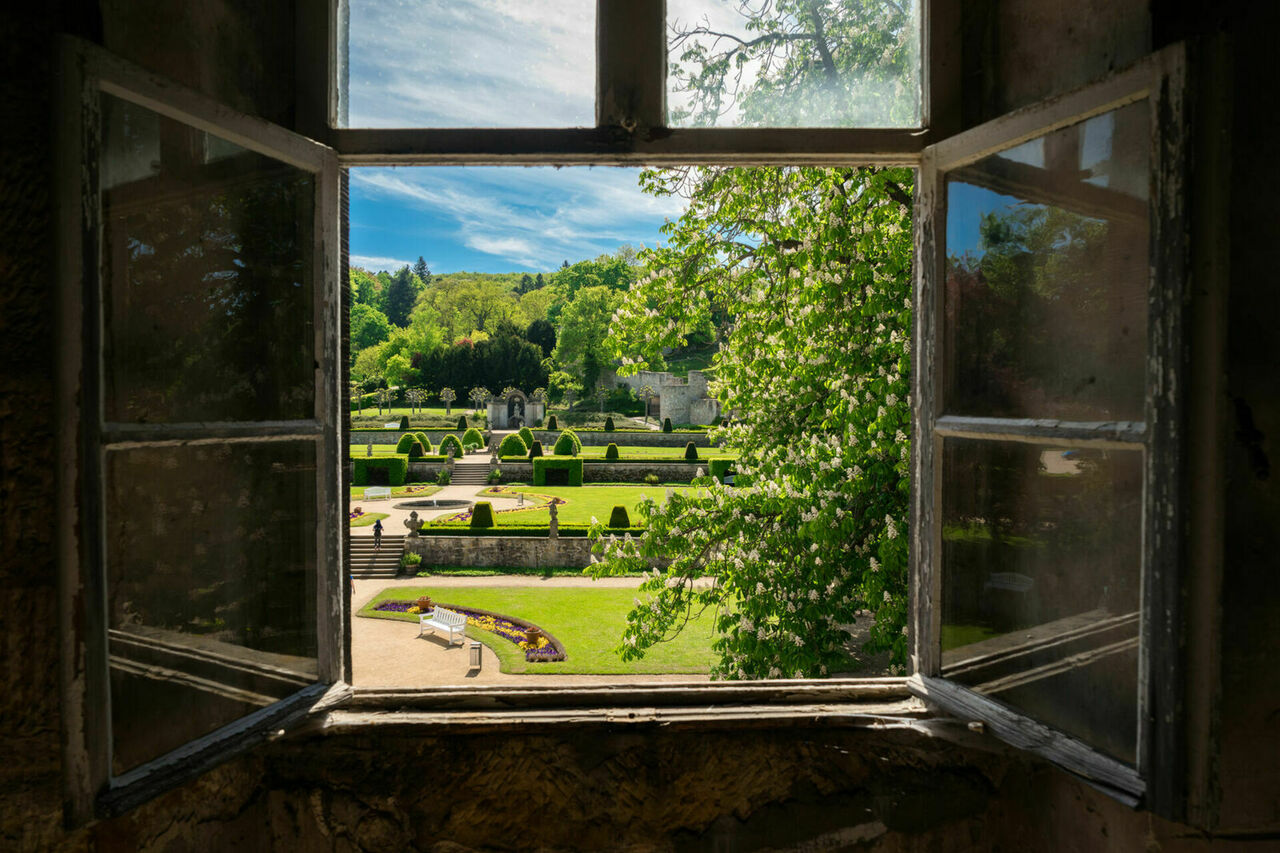 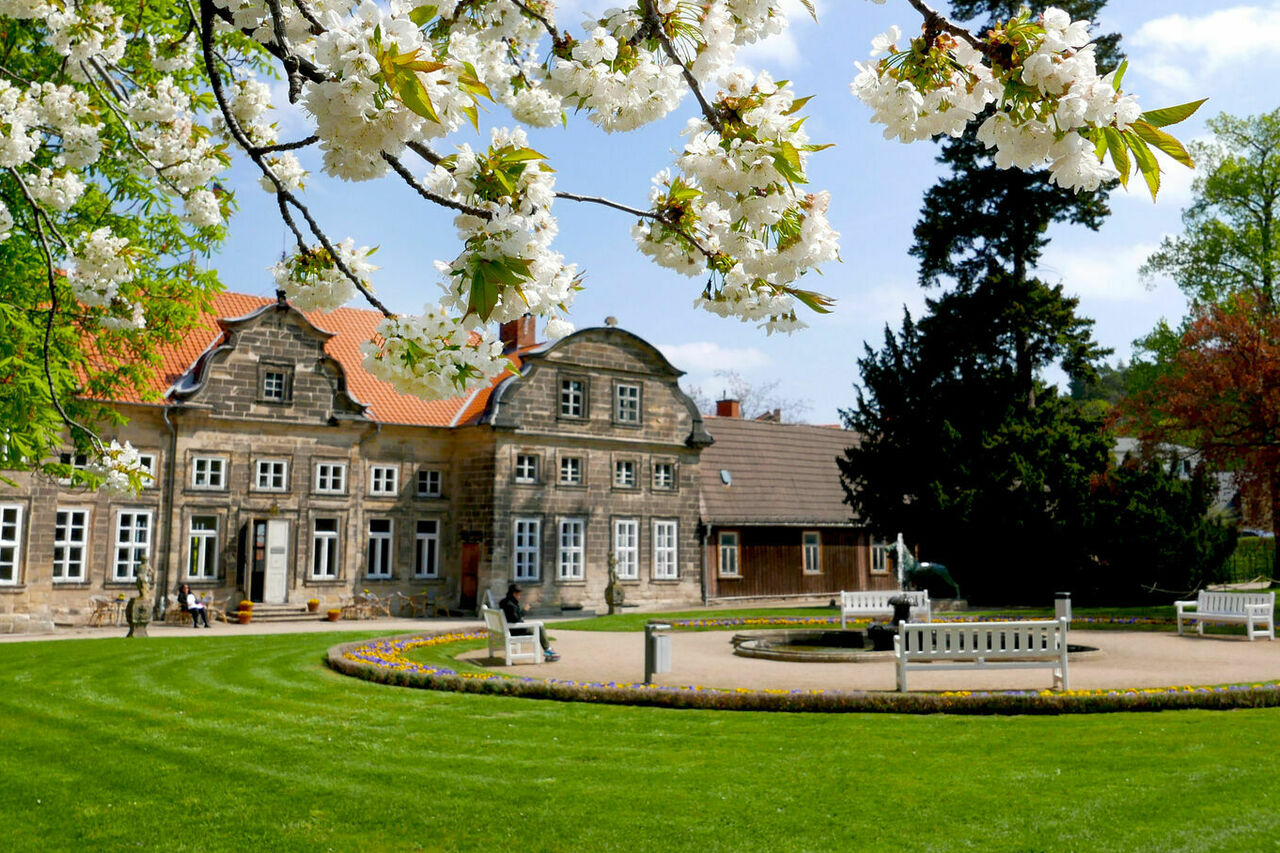 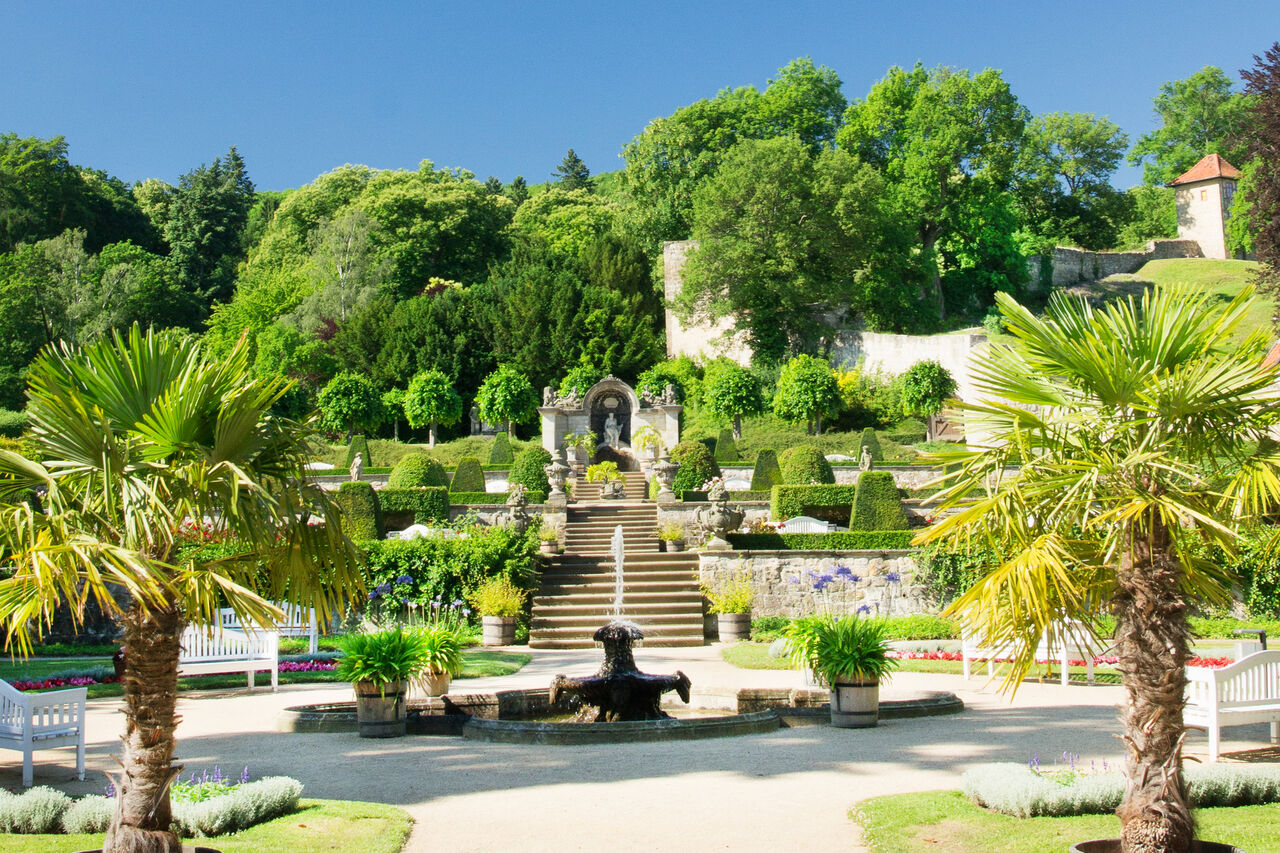 B6, B27, B81 to Blankenburg (centre), park on the Schnappelberg east of the Old Town

Arriving by bus or train
From Blankenburg station, about 750 m walk via Bahnhofstraße, Herzogstraße and Lühnertorplatz to Schnappelberg

Palace Gardens
May until October:
Sun. 2:00 p.m.
Meeting point in the terraced garden

Further garden tours and guided tours, including group arrangements, can be booked via the Tourist and Spa Information Blankenburg
Tel.: +49 (0)3944 / 28 98